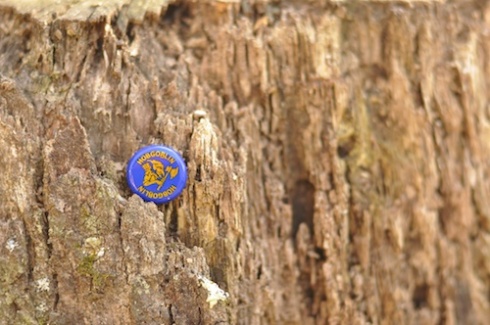 My husband purchased an English Dark Ale today made by Wychwood Brewery.  I’m an English beer fan, embracing some of their more popular beers like Fuller’s ESB and New Castle, but this beer was more roasty and complex than my normal taste of England.  The “Hobgoblin” boasts rich but smooth toasted malt and chocolate flavors.  Upon my first sip, I didn’t think it was going to taste so dark, but you really get a bitter chocolate finish.  It’s a pretty tasty brew, although a little too rich for me to have more than one (500ml bottle, that is).

English beers always have a distinctive taste that can’t be found in American beers.  I remember asking my home-brewer husband to make me a New Castle Brown Ale Clone.  He said he probably wouldn’t be able to duplicate it exactly since it was “English”.  Evidently the water in England has different minerals than our water (makes sense being a different country and all) so even if we copied and English Beer recipe exactly, it wouldn’t taste the same as the recipe being brewed over in Jolly Old England!  So… enjoy those delicious English Ales and appreciate that distinctive taste that’s all its own!

I'm a freelance photographer in Virginia who loves good beer. END_OF_DOCUMENT_TOKEN_TO_BE_REPLACED
This entry was posted on Sunday, April 17th, 2011 at 8:04 pm and tagged with craft brew, English Ale, photography and posted in beer, English Ale, malty, photography. You can follow any responses to this entry through the RSS 2.0 feed.
« Widmer – have a glass, hold the lemon.
Okay, not really a “cap” but a delicious beer! »